What do writers do when they are not writing? In my case it is mostly gardening. In fact, if you were to add up the hours I spend on each activity, gardening would probably win out. Which invites the question: am I a writer who gardens or a gardener who writes?

Since the spring of 2010 I have spent around four hours a week tending the garden of a local cancer support centre. In April 2011 we moved into a bungalow in a retirement village. At the time the majority of the homes in the development were incomplete as was the infrastructure. And that is the way it remained until a few months ago. We chose this particular unit in the ‘village’ because it has a larger garden than any of the others.

That first summer of 2011 was spent creating the first draft of the garden design, since when routine maintenance has been accompanied by frequent editing. Over the past few weeks I have spent a lot of time on various activities in the garden and very little time writing.

A major ‘edit’ in the spring of 2014 concerned the boundaries. The fences provided by the developer proved inadequate to resist the high winds that seem to be a feature of the site. We are, after all, not far from a pass through the neighbouring hills called “Windy Gap”. After the gales of January and February 2014 had blown down several sections of the fence more than once, I decided to invest in a solid wall. 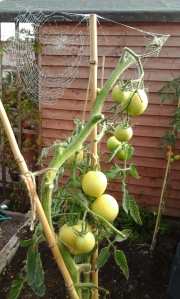 This not only provides a solid barrier, but offers a more secure support for climbing plants. There was one problem, however. When I installed a small aluminium framed greenhouse in the autumn of 2011, I positioned it close to the fence. So close that constructing a wall on that part of the boundary was impossible. A project I had lined up for this autumn, between harvesting tomatoes and bringing in tender plants for protection, was to relocate the greenhouse so as to enable the completion of the wall.

That part of the boundary separates our property from the car park of a nursing home that is part of the retirement village development. Earlier this year the proprietor of the nursing home purchased all of the unfinished homes in the village and has begun work on preparing them for occupation and completing the infrastructure. A few weeks ago the construction foreman knocked on our door to inform me that the car park boundary is to be a wall for its full length; did I mind? Of course not! It saves me the expense of having the wall completed myself. It was, however, necessary to bring forward the greenhouse relocation project, a task that has occupied me for the past three weeks.

As for the tomatoes, those that were already ripe were made into a delicious chutney, with apples from our own tree, onions and Indian spices. Some of the remainder are slowly ripening despite having had the greenhouse removed from around them, thanks to the unexpectedly warm and sunny weather of the past fortnight.

Most will not now fully ripen. My plan is to use them as the base for a green curry sauce. Oh yes, that’s something else I enjoy doing when I am not writing – cooking. But that’s another story!