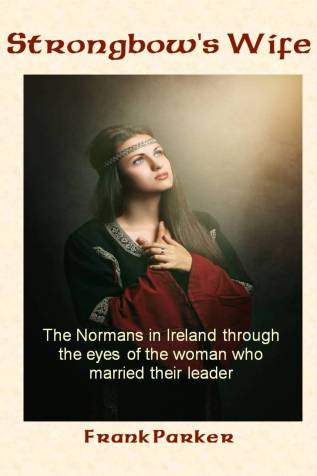 Following Strongbow’s death, Aoife was given the dowerage of Striguil Castle and estate. Her children were in the custody of King Henry at the Tower of London. On arrival at Striguil she would have discovered a great deal of hostility from native Welsh towards her husband’s fellow Normans. The immediate cause of Welsh anger was the massacre that took place at Abergavenny Castle the previous Christmas.

In my fictional version she is horrified by accounts of the event and decides to travel to Hereford in order to remonstrate with the wife and mother-in-law of the man responsible. En-route she seeks the help of her husband’s cousin, Gilbert, at Monmouth. She is disappointed to find a man who believes his support for religious foundations in the area is all the protection he needs. At Hereford her encounter with the women goes no better. Read the account of the massacre at the link above, then read this extract from Strongbow’s Wife here:

The two women who greeted me at Hereford could not have been more different from each other. Maud was young, much younger than me. Despite her youth, I was to discover that Maud already had two children. The sight of them, a boy about the same age as Isabel, and a girl barely a year younger, brought back painful memories of my last meeting with my own children.

Bertha was about the same age as my mother. It did not take me long to realise that this woman’s reaction to the loss of close family members was characterised by bitterness and hatred toward those she held responsible. With that realisation came certainty that there was no hope of securing a negotiated settlement with the Welsh.

“Do you know who you are talking to, young lady,” she began. I was instantly reminded of King Henry’s response to my father’s pleas all those years ago. My face burned as the older woman continued: “I granted you a hearing because of your late husband. I did not expect to find someone so naive. Have you learned nothing in the years since your marriage? Violence is the only language these people understand. Were you not aware they were responsible for my dear brother’s death?”

At this I shook my head and lowered it in shame. But the question was rhetorical and Bertha continued: “It was I who issued that invitation.” She paused allowing Maud to take up the account:

“The plan was mine. ‘Come and join our Christmas feast and afterwards we will come to a new arrangement to live at peace with one another.’” Both women smiled as if delighted by the memory.

The smile on Maud’s young face took on a sinister aspect as her mother continued: “The fools took us at our word as we knew they would! Just imagine: all my enemies in one place; walking willingly into our trap!”

“Clever, don’t you think?” asked Maud, her eyes sparkling, her expression suggesting contempt for any who would dare to disagree.

The embarrassment I had felt earlier evaporated to be replaced by disgust. The women were gloating, not in the least remorseful. With disgust came despair. I knew then that no Welshman would ever again trust an English man or woman’s invitation to treat for peace. All my fears for the future of Ireland were confirmed. The macabre glee with which Maud uttered those last words removed any faint hope I may have entertained that there could be, among those who now held the fate of my homeland in their hands, some who were prepared to deal magnanimously with the leaders of the indigenous people. It was not just Raymond who would go to any lengths to take as much land as he could from my people. De Lacy, the de Braoses, none could be trusted in their dealings. I had rejoiced at the death of O’Rourke, believing that Ireland had been rid of a murdering scoundrel. Now I had confirmation that he had been replaced by a marauding band of such villains.

My thoughts were interrupted by Maud. “Why do you look shocked? Are you so naive as to share that fool Gilbert’s belief that there is good to be found in all people?”

“It is a belief shared by all holy men. My uncle Laurence has ceaselessly sought to achieve an accord between my people and yours.”

I was shaken by my own words which came from my lips unbidden. “My people and yours” I had said. I had given voice to the existence of a clear division between the very peoples who were supposed to have been joined by my marriage. Where was the spirit of reconciliation in that?

I thought again about my children. Unlike Maud’s offspring, they have a mixed ancestry. Would that bring about a future accord or would they be forced to choose between their Norman and Irish heritage? I resolved to concentrate on removing them from the clutches of the king for fear that they may never learn anything about the latter. But Maud was responding:

“And what good has that done? A treaty that gives O’Connor what he already held. And, now, the appointment of a weak man as governor of the island!”

A weak man? I could not understand her use of the description “weak” in connection with Raymond!

In answer to my surprised reaction, Bertha spoke with contempt: “You don’t know, do you? Raymond has been pushed aside. Fitz Audelm has been appointed. Raymond is his deputy.”

I suddenly remembered the months when Richard, de Lacy and de Braose were recalled to serve the king and Fitz Audelm took charge. The Irish took their chance and began winning back land from the Normans. It was after that that Richard was forced to accept Raymond’s terms; Basilia’s hand in return for Raymond’s help. I doubted Fitz Audelm’s ability to curb Raymond’s activities but decided it was best not to voice such thoughts in front of these vile creatures. If Bertha and Maud believed that Fitz Audelm’s appointment was to the advantage of their respective husbands I would not contradict them.

On the ride back to Striguil I could not help but regret that I ever undertook the trip to Hereford. It was in truth a waste of my time. I ought to have been concentrating my efforts on increasing the capacity of the Striguil estate to generate income. Its defences needed strengthening. The confidence with which I had, in my conversation with Thomas, asserted my determination to see that done needed to be supported by action. Doing so would be costly both in materials and in labour. And I also needed to ensure that the estate was able to provide an income for Gilbert and a valuable dowry for Isabel. The turmoil I feared was about to engulf Ireland meant that part of my inheritance was far from secure. I deemed it of the utmost importance that Striguil was protected and developed.

I also realised that my vow to remove my children from London was unrealistic. They would never be safe in Wales or in Ireland. However well I protected Striguil, were it to become known that its young heirs were present its liability to attack would be increased. I hated the thought that they were being educated in Anglo-Norman culture, whence they were in danger of acquiring the same contempt for Welsh and Irish traditions so starkly revealed to me by the de Braose women. How, I wondered, could I prevent this; or, at least, provide them with a better understanding of their Irish heritage?

I had been surprised at the ease with which I was granted the opportunity to visit them in the great tower. I must take advantage of this apparent willingness of the king’s courtiers to permit such access and make frequent visits to London. I remembered again how much they had enjoyed the old songs. I could build on that, retelling the sagas, the exploits of our ancestors, Brian Boruma and my great grand-father who bore the same name as my father and was held, by all who came after, in the same high esteem my father had craved but failed to achieve. And what I could not tell them in person I resolved to write down and have dispatched to them at frequent intervals.

But first I must explore further the idea that had been forming in the back of my mind ever since the encounter with Geoffrey the woodsman.

2 thoughts on “The Search for Peace: Strongbow’s Wife extract”