This was written in response to a prompt from our writers’ group: “It throbbed and vibrated”. I think the person who came up with it had in mind something in the ‘weird science’ genre. My take on the phrase turned into a tribute to my dad and, by extension, all those who have given their lives in the name of freedom. I didn’t initially have the significance of 11th November in mind.

The engine throbbed and vibrated. Uncle George released the clutch lever and set off at a fast pace behind the mower with its sputtering exhaust, the sound uncannily resembling the word ATCO emblazoned on the fuel tank and on the guard shielding the chain that drove the heavy roller at the rear. I trotted behind, savouring the aromas of newly cut grass and spent fuel.

Uncle George was not really my uncle. The only connection between us was that his son and my father had been fellow crew members on a Lancaster bomber shot from the sky over the German industrial city of Mannheim a number of years before. Mum had tried to contact the families of each of the crew members and George’s wife had responded. She and my mother became lifelong friends. We spent summer holidays at their home in a small town a short distance from Swansea.

George was green keeper at the local municipal park. He was also a former champion bowls player. No-one could possibly have lavished more care and attention on the bowling green at the centre of the park. On this occasion, which was to be repeated many times, I had accompanied him to work. The grass of the green, already perfect in my young eyes, needed to be pristine ahead of a bowls match set to take place later that day. The flat square lay in a depression formed by half-metre high banks, these latter separated from the green by a shallow channel that, I suppose, formed a part of the drainage system for the green.

The green was mowed in at least two and sometimes three different directions, brushed and rolled to ensure nothing could interfere with the travel of the shiny wooden spheres when players rolled them from one side to the other, aiming to have the bowl stop as close as possible to a small white ceramic ball without actually touching it.

Looking back, I imagine that the throbbing and vibrations emitted by the two-stroke engine of the lawn mower were as nothing in comparison to the conditions endured by George’s son, my father, and the five other members of the bomber crew as they headed through the dark night skies from their base in Eastern England to various cities in the industrial heartland of Germany. The drone of 4 Rolls-Royce Merlin engines straining to carry the weight of the aircraft and 16 tonnes of high explosive would have formed the background, but there would surely have been plenty of vibration from the air frame shuddering and throbbing through the rudimentary seating into the young men’s bodies. 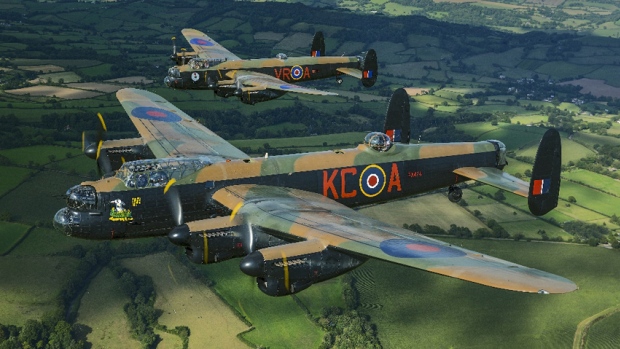 A typical sortie would last at least 5, sometimes 7, hours, commencing any time between 10pm and midnight. Five, six or seven hours of noise and vibration. Hours, I can only imagine, of sheer terror as they wondered, on the outward leg, what awaited them as they crossed into enemy air space. There would, I am sure, have been plenty of thumping from anti-arcraft shells exploding around them and the ever present threat of attack from German fighter aircraft.

Their role, as pathfinders, involved them arriving on scene ahead of the main force to drop flares in order to illuminate the target. They would then drop their own bomb load and hang around photographing and noting the damage before being the last to leave the area. Sounds to me like the most dangerous of operations. Little wonder that so many failed to return.

It’s more than twenty years now since I acquired a set of the operations record book pages for the squadron for the period leading up to my father’s last sortie. Reading some of the entries whilst preparing for this piece I came across the following entry for one of the crews, describing an aborted mission that took place on the 25th May 1943.

The intended target was Dusseldorf. One of the aircraft took off at a quarter to midnight and was back at ten to two the following morning. They reported that the operation was abandoned after dropping four of their bombs. Starboard inner engine unserviceable and airscrew control for port inner. Jettisoned 2 x 2000 HC safe … 1 x 2000 HC dropped live off Dutch coast (fusing box failed). 1 x 2000 HC hung up on the jettison.

They landed at a different field from the one from which they had taken off. I can’t begin to imagine the heart pounding as you limp home on two engines, trying desperately to off-load 8 tonnes of unused bombs in order to lighten your load.

The aircraft flown by my father’s crew that night also returned early (at a quarter to three) owing to excessive petrol consumption. Having dropped 4 bombs on target, they bombed successfully Haamstede airfield. Looking at the map, I see that this is on the Dutch coast, west of Antwerp.

On 17th and 18th of November there was a slight change in routine as they took off around 5pm bound for Manheim. On the 17th they were home at ten to eleven. On the 18th they failed to return. It was the last trip in their operational tour. Their captain, a Canadian, had joined in April that year and between 4th May and 18th November they completed 30 missions – over 150 hours of throbbing, vibrating terror.

Getting back to the lawn mower, I have to say that I have always envied those who spend summer days behind, or seated upon, lawn mowers. It seems like an ideal occupation for someone who loves the outdoors. Those aromas, of fresh cut grass mixed with petrol; the ability to move across an area of rough grass, leaving behind broad bands of light and dark green, holds a fascination that has never left me. And it’s a long way from the terrors of war.