The very people who voted ‘leave’ in the UK, and for Trump in the USA, are the ones most likely to suffer as a consequence.

The above is from my ancient copy of the Concise Oxford Dictionary. Confirming that ‘elite’ means best. So how did the expression ‘the elites’ become a term of abuse, used in contempt to describe those we believe have too much power and influence? And, if we accept that there are individuals who singly, or as a group, have too much power, what is the best way to deal with the situation?

For the most part such people are characterised by being better educated than the average citizen, having greater intelligence than the average citizen, being, in fact, the best at whatever they do. Whether they practice law or medicine, run successful businesses or become successful sportsmen or women, or entertainers, they are the leaders of their profession. Is that a reason to hold them in contempt? I think not.

And, when it comes to sportsmen/women and entertainers we take the diametrically opposite view, worshiping them like gods. It’s the lawyers, accountants and business people that we hold in contempt, not because they are the best at what they do, but because we believe they have access to the best of the resources that should be available to all. We want a bigger share for ourselves. So we take actions we believe will have the effect of taking away some of their power and influence, giving it to us instead.

That, of course, is a perfectly reasonable position to take. It’s the reason I involved myself in a small way in politics in the 1980s. But something strange has happened this year. Something that I simply cannot understand. In Britain people voted to leave the European Union. And, in USA, people voted in large numbers for Donald Trump.

Now, I am not going to say much about USA politics except this: faced with a choice between two members of ‘the elite’, one a billionaire property developer, the other a human rights lawyer, I have no doubt whatsoever as to which one is most likely to take actions to improve the lot of the least well off citizens. 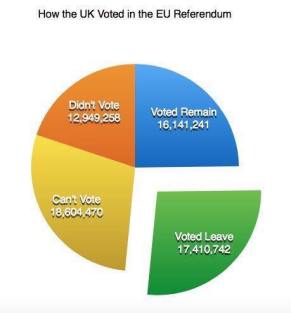 I do know rather more about the UK and Europe than about the USA. I know, for example, that one of the guiding principles of the EU is that very redistribution of opportunity and resources that those who voted ‘leave’ on June 23rd were seeking. The reason Britain is a net contributor to the EU budget is because it is one of the richest nations in the union. The European Social Fund and the European Regional Development Fund, are two examples of how the EU redistributes resources to the poorest regions. Some of those poorer regions are in the UK and have benefited from those funds. And yet the residents of those regions voted overwhelmingly to leave. That makes absolutely no sense to me.

where there are more of them. It has happened throughout the ages, from the legendary Dick Whittington who set out believing the streets of London were paved with gold, to Norman Tebbit’s father who notoriously ‘got on his bike’ to look for work in the 1930s, to the many young men and women of my generation who took advantage of assisted passage schemes to travel to Australia or Canada in the 1960s. It is also what the ‘freedom of movement’ clauses in the EU treaties seek to encourage.

The EU has been characterised by those who supported the ‘leave’ campaign as a ‘rich man’s club’. If that is the case, why are there so many rich people, so many so called ‘elites’, who supported ‘leave’, among them the foreign domiciled proprietors of many of the UK’s newspapers? Take a look at all those ‘eurosceptic’ Tories. Are they not part of ‘the elite’? Are they likely to continue policies that help support deprived areas, or are they eager to continue cutting social welfare?

This is why I said, back in June, that many in the ‘leave’ camp were deluded. And, it is out of a genuine concern for their well being that I continue to hope, and to campaign, for the reversal of this terrible decision.

4 thoughts on “Why I’m an Unashamed Bremoaner”