My latest ‘date’ is with Chris-Jean Clarke. Chris lives in South Staffordshire with her husband, Geoff, two teenagers and their adorable Papillion, Romey, who enjoys spending a few hours a week putting a smile on the faces of the patients at their local mental health hospital – Romey is a Pets as Therapy dog.

I asked first about her book Honesty in World War 2, originally published in 2016 and recently re-released.

“Honesty in World War 2 was inspired by an event that happened to my father following his National Service.

Prior to putting pen to paper (or finger to keyboard), I spent numerous hours researching and double-checking facts and stories told to me and my siblings by my mum about her experience of the war years. – She was only seven years old, when the war ended. – My mum inspired a number of events in my story. For example, my mum used to be a Tomboy and loved climbing trees. She bet the local boys that she could climb higher than them. On the positive side, she succeeded in her quest as she fell, bringing the branch down with her. However, on the negative side, she gashed her leg on a barbed wire fence. She often showed us her scar and was proud that she didn’t have any stitch marks, which she attributed to my granddad (her father) using a cobweb on the wound. In my story, twins Simon & Samuel (two of the evacuees) are playing by the brook when one of them has an accident. – Having been brought up in the city they not only struggle with living in the countryside, but would rather create mayhem than attempt to fit in. – Imagine their horror when Cyril’s mum starts to bandage a cobweb to the wound on Simon’s leg, especially as the villagers had already tied a pig’s lung to their younger sister’s feet to cure her of Pneumonia!

Although, Honesty in World War 2 was taken down from publication for a short while & has since been re-released, this was due to personal reasons. I promise the story has not been amended since 2016.”

Next I asked her about To Dye For and the Books4Kids programme for which it was written.

“PS Publishing and the Books 4 Kids program is a 501c3 non-profit corporation with a mission to “build children’s character through books.” The B4K brings authors to the classroom – in person or through electronic conferencing. The author reads from his or her book, answers student questions and then leads a discussion re. the moral of the book. – The moral behind To Dye For is self-esteem. – At the end of the discussion each child receives a free copy of the book.

To Dye For opens with Beth, a year-ten student daydreaming about fellow student, Mikolos (“Mike”) Samaras. However, thanks to the antics of Jenny Parker and Shelly Barnes, Beth truly believes that she doesn’t stand a chance with a guy like Mike – because she has red hair. Unwittingly, Mike also reinforces this notion by frequently teasing Beth about her hair. Beth becomes so despondent about her appearance that she decides the only way to solve her problems, is to emulate her younger sister’s beautiful locks and dye her hair the same shade as Grace’s. – After all, Grace is adored by everyone and has stunning strawberry blonde hair.”

Chris is a member of the Peacock Writers, a group of eighteen independent writers from around the world.

“Each of our anthologies are written around a given theme. 100% of the profits from the sale of these books are donated to aid various charities. 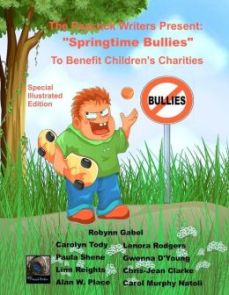 I have contributed to nine books, so far, but the book I would strongly recommend is: Springtime Bullies: Special Illustrated Edition (The Peacock Writers Present) (Volume 6)”

Before becoming a writer Chris had a long career working with people with disabilities. I asked her how that experience influenced her writing projects.

“Many of my stories have at least one secondary character who has a disability or special need.

For example, Beth’s sister, Grace in To Dye For has Down’s syndrome. Whilst, in Honesty in World War 2, Malcolm a veteran of the first world war, is slightly senile, and in a way childlike. Whereas, Graham is severely scarred and has walking difficulties – these injuries were incurred when his family home in London was bombed during the war.”

Chris doesn’t have “the luxury of having a quiet space to write, but that’s okay because I know deep down that if my family were to fly the nest, I would just waste the hours stressing about them, instead of writing.”

When it comes to editing, illustration and cover design, Chris uses a range of specialist services.

“To Dye For was edited by my publishing company, PS publishing and the Books 4 Kids program. They also commissioned an illustrator for my cover design.

Honesty in World War 2 was edited by Valerie Byron, author of No Ordinary Woman and other works. Trish Reeb, author of Death by Default and other works, proofread my manuscript. The online community at BookRix & LinkedIn encouraged me to work and rework my opening chapter to create the atmosphere and mood of the train station. (Initially, I had only intended the first chapter to be written in a couple of lines, as I wanted to swiftly move into Cyril’s story. Instead, Cyril’s story starts in chapter two.) Another member at BookRix created my cover for me, by manipulating Emily Roesly’s images. (NB Approval was sought from and granted by Ms. Roesly, author of Whispering Water and other works.) Sharon Brownlie, author of Betrayal and other works reformatted my cover, so that I have the option to have it published as a paperback or hardback copy, later this year.

My books for the Peacock Writers anthologies are edited as a group effort. – We read each other’s stories and offer each other tips. One of our members, Laszlo Kugler, author of Whisper and other works, creates most of our cover art.”

“More of my books have sold since I have been active in FaceBook’s promotional groups, geared to drawing writers and authors together.

However, the other platforms have also been beneficial to me in their own right. In addition, to the support at BookRix community, their system converts our files so that our eBooks can be purchased from all of the major online stores. Trish Reeb, reached out to me via Twitter & offered her free time to proofread Honesty in World War 2. This story has also attracted interest at LinkedIn from a publishing company seeking autobiographies, and an indie film script writer.”

When I asked about writers whose work she admires, she nominated Doug Simpson, author of Soul Awakening.

“[He] is my inspiration. Although Simpson’s story is fictionalised, it is based on his belief that it is plausible for a person to have lived previous lives, whilst still holding fast to, and respecting, the religious belief that there is a heaven (or hell). It gave me great peace of mind to think that I may become acquainted again with family members who have passed on before me, and I don’t need to wait until I die before I will be able to chat to them again.”

As usual I wound up our discussion by asking Chris to reveal something about herself that might surprise her readers.

“Approximately 65% of my employment, took me from mundane to far flung places. One day, I could be cleaning/tidying bedrooms & bathrooms, wiping bums or cleaning up vomit, and the next I could be shopping for clothes or Christmas/birthday presents, eating out/going to the pictures or going on day trips/holidays in England and overseas.”

I enjoyed my date with Chris Jean Clarke and, now that I have shared it with you, I hope you did to.