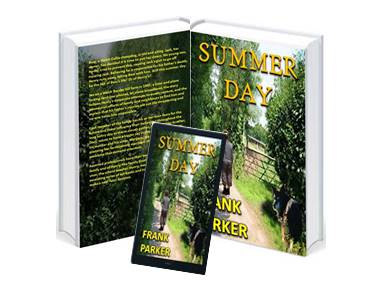 I’m Frank Parker and I am a writer. I didn’t used to be. Like many people I always wanted to be. On several occasions during my career as an Engineer I produced stories that I submitted to publishers. I even had a writing job once. It involved talking to small and medium sized businesses and writing up profiles for a regional business magazine. To make any money you had to sell advertising to accompany the articles. Selling is not a skill that comes naturally to me so that job did not last long.

I returned to Engineering, working on chemical plants, refineries and power stations throughout the North and Midlands of England. In 1997 I joined a defence contractor as a project administrator, a job that saw me through until retirement in the autumn of 2006. I came to live in the Irish Midlands so as to be near my son and his family. And, now at last, I have the freedom to write.

So far I’ve self-published 4 novels and two collections of short stories. You can find out more about them here. My stories have also appeared in anthologies published independently in County Laois.

I have also pursued a lifelong interest in politics. Between 1985 and 1991 I served as a councilor in North East Lincolnshire. So you should not be surprised to find posts on my blog commenting on current affairs from a broadly Liberal point of view. The environment and the damage we are doing to it, from agri-chemicals and air and water pollution to climate change, has always been a matter of concern to me. As a councilor I argued the case for the local authority to purchase timber products only from sustainable sources.

Since 2013 I have been studying Irish history in an attempt to gain a fuller understanding of the turbulent relationship between that country and its near neighbour. It began when I discovered that among the leaders of the Norman invasion of Ireland in the 12th century were a number of individuals with a prior connection to the county in which I was born and grew up, Herefordshire. That discovery lies behind my historical novel Strongbow’s Wife which describes the invasion and its aftermath from the point of the view of the woman who married one of the most powerful of those leaders. You will find articles about some of the people and places involved by clicking the Hereford and Ireland History tab above.

For the past year I have been researching the background to the period in Irish history usually referred to as The Great Irish Famine. This work was prompted by a friend and together we hope to produce a book on the subject. Early drafts of some of the first few chapters will be presented here shortly.. You can read more about me in this interview on Mercedes Fox’s blog, on Chris Graham’s website and on Denzil The Book Owl where he also reviews the famine book. And there’s this at Smashwords.

Read my book as it develops at Chapter Buzz

Music and the Thoughts It Can Inspire

Bipartisan dialogue for the politically engaged

I'm not sure what I'm doing

Seeking Dialogue to Inform, Enlighten, and/or Amuse You and Me

A Dad trying to cope with the loss of his Partner and becoming a single parent.

SHORT STORIES AND OTHER FICTIONS

How to be old—we're all learning

echoes from another time

A European from Yorkshire interested in people, politics, democracy, history and cultivating my garden!

official home page of the author

Notes from the U.K.

Exploring the spidery corners of a culture and the weird stuff that tourist brochures ignore.