To date I’ve published 5 novels and 1 non-fiction book since 2011. I also have a story included in an internationally best selling anthology. Here they are in reverse chronological order:

Another searing account of a terrible period in Irish history.

When a government official exposes the unpalatable truth about the famine in mid-nineteenth century West Clare he is called to account by the men he accuses.

Abandoned by his masters, he has only his strength of character and the love of his wife and daughter to sustain him as he fights famine and disease in a land teeming with destitute men, women and children.

A Purgatory of Misery.

Published November 2017, this is my attempt to understand the circumstances of the famine that afflicted Ireland for several years in the middle of the nineteenth century when the United Kingdom, of which it was a part, was at the height of its success as an imperial power.

Whilst the British elites were celebrating the achievements of Empire, a million people died from lack of food and housing elsewhere in the United Kingdom.

This layman’s attempt to understand the combination of factors that led to the worst humanitarian crisis in British history is important because such things are still happening elsewhere in the world. Is it possible for humanity to achieve the Liberal ideal of the greatest good for the greatest number or are Malthus’s predictions about the relationship between population and food production about to come true?

Above is the Amazon link. Here’s the link for other digital book providers

The Box Under The Bed 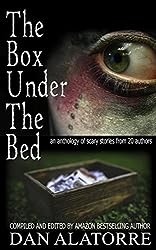 Published 1st October 2017, over 3,500 copies of the digital version of this scary anthology have been distributed already. My story is based on real events that I came across whilst researching the Irish famine. It is one of 25 stories by 20 authors, some of them best-sellers, some of them never before published. A great book to dip into for thrills and shivers at any time. Consistently in the top 20 for the category of horror anthologies.

My 2015 novel explores the changes in attitudes to sex

and sexuality over the last 70 years.  Having been professionally edited by Eamon at Clear-View editing, it is available in Kindle and Paper Back editions* at Amazon.com and Amazon.co.uk

Forty years ago four people conspired to conceal a teenage pregnancy. Now one of them is dead and a book about her threatens to expose a Member of Parliament’s guilty secret. For how long will Roger be able to prevent Sally getting at the truth of her parentage? Can he prevent the break-up of his own long term gay relationship?

We’ve come a long way from the prudery still prevalent in post WWII Britain to the acceptance of gay marriage. Did the new found sexual freedoms of the 1970s send the wrong signals to men who regard young women as ‘fair game’ for predatory behaviour and make recently exposed scandals involving celebrities inevitable?

The e-book is now also available via Draft2Digital at the many libraries and e-book retailers to whom they distribute, including Apple and B&N.

*The paper back is now also widely available. Your local bookshop should be able to order it by quoting the ISBN:

She was 14 when her father gave her in marriage to a foreign warrior in return for the restoration of his kingdom. Her daughter would marry a man who served three English kings and ended his life as Regent. What was it like to be Strongbow’s wife and, later, his widow? Could she forgive her father or his arch-enemy O’Rourke? What became of her after Strongbow’s death?

Based on the real events of the Norman invasion of Ireland between 1167 and the 1170s this is a young woman’s account of life in medieval Ireland and England. You can read more about the real people and events in the Hereford and Ireland History section of this site.

Available in digital and paper back. Above is the Amazon link, here is the link to other e-book distributers

He shot his father. How will he face the terrifying consequences?

Bess, a Welsh Collie sheepdog, is old and ailing. Jack, her owner, has decided it is time to put her down. His young son, Henry, tries to prevent this, causing Jack’s gun to go off injuring Jack. Believing he is responsible for his father’s death, Henry runs away, taking Bess with him. Will this summer day be the last of Bess’s life? Or of Henry’s?
Set on a Welsh Border hill farm in 1947, a time and place lacking land-line phones, let alone broadband, the story follows Henry’s desperate attempts to evade capture, and the amateurish efforts of family and neighbours to find him and explain that his father’s injuries are not life threatening and no-one holds him responsible.
Above is the Amazon link. This one will enable you to purchase from other e-book providers.

When 19 year old Paul, newly arrived from Ireland, is deceived by Maeve in 1890s Brooklyn he joins the rush to seek Klondike gold. Full of regret at the cruel trick to which she has been forced to subject Paul, Maeve escapes to Chicago where she gives birth to a child who is immediately given up for adoption. She is taken under the wing of an up and coming young artist and when she too learns to paint they form a successful partnership.

Paul cannot stop dreaming about the red haired girl with sparkling green eyes and when he comes across one of her grief-filled paintings a friend encourages him to travel to Chicago to meet her. Maeve is more interested in locating her daughter, now grown up, and the story reaches a dramatic climax as the trio meet against the backdrop of the Red Riots of the summer of 1919. This book is not yet available other than at Amazon. Look out for the launch of a revised edition of this, my first published book, later this year.

Also available: A Way With Words and Prompt Responses